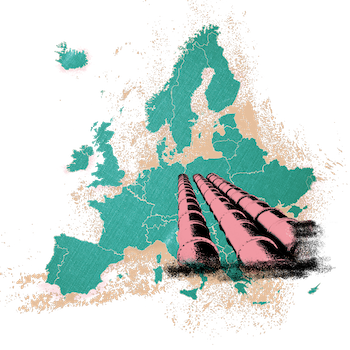 ❌ They aim to spread uncertainty and destabilise the European market. 12 EU countries are already directly affected by a partial or total cut-off of Russian gas.

Filling our gas storage capacities before this winter can help us prepare for possible further gas supply disruptions and cut-offs.

For this, all EU countries need to:
✅ Fill at least 80% of their gas storage before this winter
✅ Put in place their national contingency plans

We need to make sure that in case of full disruption, the gas flows towards where it is most needed.

That’s why we are now working on a coordinated approach — our European emergency plan.

European Union countries announced last night that they had agreed to a substantial ban on the import of Russian oil. After opposition voiced by Hungary, imports will only be halted on oil that arrives by sea, but the sanctions still account for two-thirds of all Russian oil supplied to the EU.

Russia had been delivering 27 percent of the EU’s imported oil and was receiving roughly €400 billion a year from member countries. European Council chief Charles Michel said on Twitter that the deal means “cutting a huge source of financing for (Russia’s) war machine”, and puts “maximum pressure on Russia to end the war.”

As this chart using the latest UN Comtrade data highlights, the combined economic effect of an EU import stop is significant. It seems like #EU will find a way to embargo two thirds of Russian oil. In this case consensus is a strong signal. Two thirds cut is a good first step. Next up Russian gas, which will also need time and political maneuvering.

China is the largest recipient of Russian oil by a large margin. Just taking into account the countries included at the top end of the list as displayed in this chart, over 40 percent of Russia’s trade value from oil exports would be removed in the case of a complete ban by the European Commission. Pledges from Germany and Poland to stop importing pipeline oil by the end of the year will result in such embargo which can ban 90 percent of Russia’s oil imports to the European Union.

Agreement to ban export of Russian oil to the EU.

This immediately covers more than 2/3 of oil imports from Russia, cutting a huge source of financing for its war machine.

Maximum pressure on Russia to end the war.